Amber Johnson is the Editor of The Denver Post’s Mile High Mamas and blogs at CrazyBlogginCanuck.com.

The town of Aspen has a couple of things working against it: exorbitant prices and a reputation for misbehaving celebrities such as Charlie Sheen and those on VH1’s controversial Secrets of Aspen. Fortunately, it has even more going for it.

My family visited Snowmass for the first time last weekend. I was eager to try the largest of Aspen Ski Companys highly acclaimed four resorts but I was also worried I wouldn’t fit in. I dont own fur and my nails haven’t seen a manicure since those fake nails I wore to my high school graduation. Turns out, it didn’t matter. I was, after all, at a world-class ski resort. I just wore gloves the entire time. 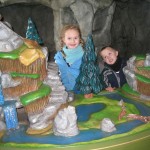 If you have kids, there is nothing greater than Snowmass’ 25,000-square-foot Tree House Kid’s Adventure Center. The $17 million facility stands as the first of its kind in the snowsports industry with a host of themed rooms for ages eight weeks and older as well as a climbing gym, teen activities and kids’ retail. 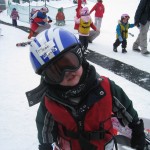 Snowmass is renowned for its ski school and employs hundreds of instructors. We enrolled 3-year-old Bode in the Bears class and 5-year-old Hadley was a Grizzly ($130 for a full day). With only 6 percent of its 3,132 acres classified as =”easiest”, Snowmass is an intermediate/advanced mountain. The beginner areas became a war zone as newbies practically battled it out for their place to face-plant. The upper mountain was gloriously devoid of lines and crowds.

My children still had the time of their lives.

Jamie and I are pretty equal in our skiing ability with the exception that he likes to hit the terrain park. I recently got hit by a snowboarder at a terrain park as I tried to photograph Jamie.

That is about as much as we have in common as it pertains to terrain parks. 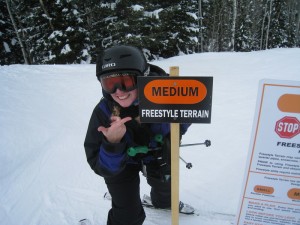 We had only been skiing an hour when Jamie spotted one of Snowmass’ three terrain parks and the coercion began. I resisted until I saw a class of 6-year-olds tackle it. I reluctantly relented.

I guess you could say I gave in to kid pressure.

Snowmass has done it right. Instead of just having suicidal 10-foot jumps and rails, this one was rated “medium”, which, in terrain-park-speak means “Easy Enough-For-a-30-Something-Mom-to-Have-Visions-of-Ski-Cross-Olympic-Grandeur-Without-Killing-Herself.”

On the same note, at the end of his lesson, Bode proclaimed, “I skied FAST like Bode Miller!”

Look for us at the 2014 Olympic Games in Sochi, Russia. 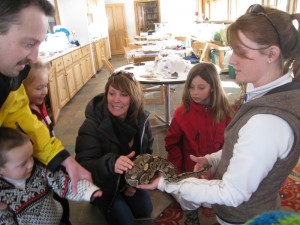 Our first experience in Aspen defied all the town’s stereotypes. ACES (Aspen Center for Environmental Studies) is a non-profit 25-acre preserve that offers educational programs and activities about nature, ecology, and the environment. Or, as my daughter Hadley summarized,

“There were some dead animals and others were alive.”

We joined in as a local elementary school made animals tracks of plaster and my kids touched a python snake. We went for a walk on the Forest Trail along a natural spring that fills Hallan Lake, which is maintained by a family of beavers. Even under a blanket of snow, the wetlands dazzled in winter. We visited two non-releasable birds of prey: a 27-year-old golden eagle and gray-horned owl.

In winter, ACES offers showshoe tours in Aspen, Snowmass and Ashcroft. Summer is king for kids and classes include the Little Naturalist, which focuses on different animals each session. Week-long classes are also offered including Exploring Around (ages 5-6) and Wild Exploration (ages 7-8). The summer schedule will be posted in mid-March at aspennature.org. 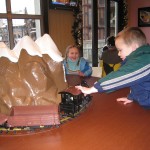 The Sweet Life is Snowmass’ sweetheart of family dining. Located in the base village, this is THE must-eat-at restaurant for kids. The first floor is a candy store and ice cream parlor on steroids. The top floor is a 1950s-style diner that is every child’s fantasy. Don’t miss out on the chicken lollipops, 15 varieties of cupcakes (including root beer float and candied lemonade), fried Oreos, funnel cake fries, and a separate menu of nine different S’mores. 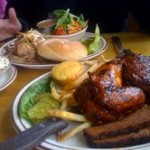 Skiing and riding works up an appetite and Sam’s Smokehouse satisfies. The new 7,800-square-foot barbecue-style smokehouse has stunning views of Garret’s Peak, Mount Daly and the surrounding backcountry with floor-to-ceiling windows. Try their pulled pork sandwich, smoked chicken, and barbecue glazed citrus shrimp, topped off by organic apple crisp. Just don’t believe your husband when he says “I’ll only have two bites of dessert” because he will invariably polish it off.

His defense? “They were just really big bites.” 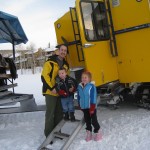 Best Splurge
There is something almost surreal about piling into a snowcat (or a “snowkitty” according to my 3-year-old son) and creeping up a steep mountain slope to a cozy cabin encapsulated by winter’s magical snow globe. Elegant Lynn Britt Cabin gives you that kind of experience. Add that to an ever-changing four-course gourmet meal, Rich (a hilarious guitar-strumming, harmonica-playing entertainer) and you have an unforgettable evening.

Best Off-the-Beaten-Path Restaurant
I am remiss we did not have time to go to Woody Creek Tavern because it came highly recommended from multiple sources. Just six miles from Snowmass, this quirky cowboy dive bar/restaurant boasts the best enchiladas and tamales you will ever taste. Though celebrities are regulars, Woody Creek Tavern prides itself as being “anti-establishmentarianism.”

Whatever the heck that means in a celebrity-kissed town that does a stellar job catering to families.

Mile High Mamas is giving away four tickets for your family to ski Snowmass this season. Please go here to enter. Contest deadline is March 10, 2010.