Article written by and shared with the permission of Amber Johnson.

The stakes were high for my 3-year-old son Bode’s first time on skis at Loveland Ski Area. The child was, after all, named after World Cup skiing sensation Bode Miller.

Better to live up to that than my namesake Forever Amber, a novel about a 17th-century prostitute. 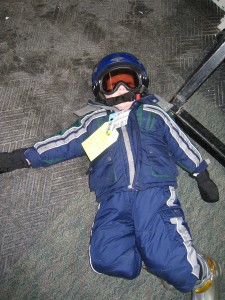 I had never skied Loveland before and immediately fell in love because of its terrain (93 trails on 1,570 acres), affordability (discount tickets are $52) and proximity (just 53 miles from downtown Denver, directly off I-70).

This is the first year both of my children are old enough to ski so I enrolled them in the Loveland Ski and Ride School in Loveland Valley. A full-day lesson, lift ticket and lunch are $91, a veritable steal compared to other resorts. Enroll your child (or beginner adult) in three classes and they will receive a free season pass to work on their turns all season long.

Children may not start group lessons until they are 4 so we put Bode in a private lesson. He was tired and his check-in process did not go smoothly when he tried to walk around in his awkward ski boots.

I started wondering if we’d need to go with Plan B and put him in the on-site childcare center. While certainly not a bad option, we really wanted to get him on the slopes. 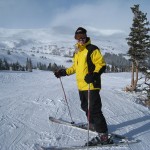 My husband Jamie and I left him there (as all good parents do), promising to check on him after his lesson started. The lift connecting Loveland Valley to the resort was not operating so we hopped on the free shuttle to Loveland Basin where we grabbed some demo skis and hit the slopes for the first time this season.

It was glorious…and a very cold -10 degrees Fahrenheit. We huddled up on the chairlift as we marveled at the sweeping views of the Continental Divide. It was early-season so only about 20% of the terrain was open. We didn’t care and found enough powder stashes off Lifts 1, 2 and 3 to keep us happy. The highest chairlift (Lift 9) soars to 12,900 feet so conditions are sometimes cold and windy but always epic.

After a couple of hours, Jamie and I fearfully rode the shuttle back to Loveland Valley. We weren’t sure what we would find. Bode crumbled up on the snow in tears? Screaming bloody murder? Or maybe he wouldn’t even make it to the slopes. 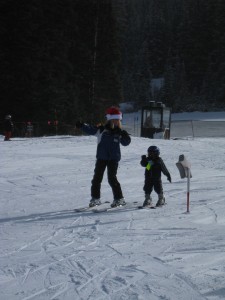 We were shocked and delighted to find our little Olympic hopeful grinning from ear-to-ear with his private (and utterly delightful) instructor Terry. His earlier discontent was forgotten. He rode the magic carpet like a pro and under Terry’s careful supervision, he skied down the bunny slope by himself.

As he zoomed past us at the record-breaking speed of 0.05-mile per hour, he squealed, “I wike it!”

He then pointed to the chairlift and steeper slope behind him. “I want to go dere,” he told his instructor. He spent the rest of the day on the more advanced terrain.

Hadley and Bode claimed lunch was “delicious” with corn dogs, tater tots, apples and cookies, followed by a surprise visit from skiing Santa.

Who was evidently slacking off from his duties that Christmas Eve.

If I were to have a tagline for Loveland Ski Area, it would be “We’re not fancy…we’re about family,” which is exactly how Jamie and I felt while eating lunch at their only lodge. The cafeteria was like a huge reunion as people reconnected while eating hearty sandwiches, Mexican food, savory pastas, homemade soups, made-to-order pizzas and more.

We ate at the Wedge Bar, appropriately named because it was wedged in the middle of the busy room. I ordered chili and a salad while Jamie opted for the Kobe Beef Sliders. 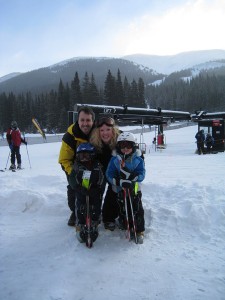 The next hour was spent in conversation with uproarious ski school instructors Mark and Michael, who were enjoying a day off. They divulged their favorite areas to ski (off Lifts 8 and 9 and Over the Rainbow) and the best thing about Loveland (everyone is very tight-knit and not pretentious).

When we picked the children up at the end of the day, they were jubilant and exhausted. As the youngest child in ski school, Bode had been adopted by some over-protective tweens. One of them told me, “If I had a little brother, I’d want him to be just like Bode!”

An appropriate sentiment at a resort where you feel like family.

Ski and stay: While Loveland Ski Area is not known as a destination resort, it does offer lodging packages. Prices start at $115 per night for one nights lodging and two lift tickets.

Win: Mile High Mamas is thrilled to offer up a four-pack of tickets to Loveland Ski Area for the family to enjoy! Please go here to enter. Contest deadline is January 15, 2010.

Note: This article is part of a winter-long series on Colorado’s resorts. Mom bloggers will be dispatched to various resorts and will share their family’s experiences and recommendations. Most activities and lodging will be provided by the resorts or Colorado Ski Country USA. Tune in often for information on great deals and ski ticket giveaways!